Arc Flash Dangers are a Concern for Business Owners

What is Arc Flash and why is understanding its dangers important to you as a business owner?

“… an arc flash is a phenomenon where a flashover of electric current leaves it’s intended path and travels through the air from one conductor to another, or to ground. The results are often violent and when a human is in close proximity to the arc flash, serious injury and even death can occur.”

The National Joint Apprenticeship and Training Committee sponsors seminars across the country to raise awareness of arc flash dangers.

They believe that not only commercial electricians, but also business owners need to be alerted to the potentially devastating results of an incident.

It can happen in a fraction of a second and the magnitude of power coming out of the electrical equipment can be deadly.

For that reason, OSHA has had laws in place since 1976 to help prevent an arc flash from happening. They require that electrical work is done – de-energized – on any circuits of 50 volts or more.

There are safety precautions that should be taken to protect commercial electricians who work on energized equipment. In addition to training on how to de-energize, protective gear should also be worn to include rubber insulating gloves, flame-resistant clothing and face protection.

An arc flash happens somewhere every day, and most of the time it is avoidable. 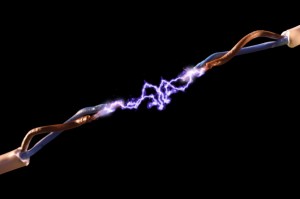 Business owners may understandably be concerned about the initial cost of electrical safety precautions.

Or the downtime (which equates to lost revenue) while a commercial electrical contractor is working on their electrical equipment.

But when you weigh that against the arc flash dangers involved, there is no comparison.

Those dollar amounts represent real emotional and physical pain to real people that can happen in a sixth of a second when proper safety precautions have not been taken.

All business owners – and especially industrial and manufacturing companies that work around electrical equipment – should educate themselves on arc flash dangers and do all they can to protect their employees’ safety.

Arc Flash Circuit Interrupters can save lives. Contact Sternberg Electric for a safety inspection and consultation.